The Davis Building is one of the most historic and architecturally distinguished buildings in downtown Dallas, Texas, USA. At 20 stories, the building was the second tallest building in Dallas when it was built in 1926, and its eastern cupola-crowned section served as the headquarters for the Republic National Bank for nearly 30 years. In 2003, the building was reborn as a luxury mixed-use apartment community featuring 183 loft-style apartment units and more than 52,000 sq ft (4,831 m2) of premier retail space housing numerous restaurants, cleaners, and a full-service day spa. With original terrazzo flooring, plaster and brick walls, and 12 – 20 ft (4 – 6 m) tall concrete ceilings with exposed ductwork, the building offers residents an eclectic blend of vintage 1920’s architecture and modern luxury living.

In an effort to honor the Davis Building’s rich history, in 2011 the building owners launched an initiative to renovate the building’s outdated exterior lighting with a dynamic, energy-efficient LED lighting solution from Philips Color Kinetics. This modern upgrade coincides with the city’s recent urban revitalization plan, which includes the renovation of a number of major skyscrapers and office buildings in the downtown area.

According to the proposal submitted to the Dallas Landmark Commission by product supplier and project manager Mark Reed-Walkup of WieDaMark, LLC, the design objective of the retrofit was simple: to give the building a unique visual identity, highlighting its original architecture while supporting the overall renewal of downtown Dallas. “The aim is to produce a vibrant, head-turning display that will act as a visual magnet, draw traffic to the building, entertain apartment owners and visitors, and generally generate a real ‘buzz’ in the city,” Reed-Walkup wrote.
Click to read the rest of the story. 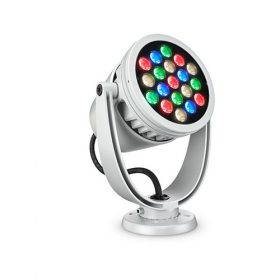